Due to legislation coming into effect in 2019, we can no longer offer lottery betting and as such some content may no longer be relevant.

27th September, 2018 – On June 1 a lucky winner from Germany scooped the EuroJackpot top prize of €90 million (AUD$137) at Lottoland – now Guinness World Records have confirmed the jackpot is the Largest online gambling pay-out in history. The GUINNESS WORLD RECORDS certificate was officially handed to Lottoland yesterday. 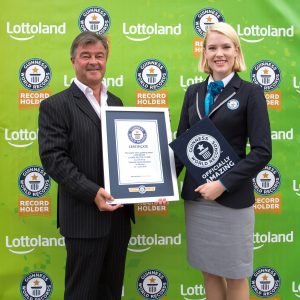 The company secured the title of “Largest Online Gambling Pay-out” after Christina, a 36-year old cleaner from Berlin, had placed a bet on the Eurojackpot lottery via her mobile on www.lottoland.com. Her mother chose the five lucky numbers (14, 19, 21, 30, 32) and the two Euro numbers (4 and 7) which matched and brought her this record-breaking win.

Luke Brill, CEO at Lottoland Australia, said: “We are absolutely delighted to achieve a GUINNESS WORLD RECORD. It’s such an accolade to find ourselves in this hall of fame. This title is a confirmation of our business model, it proves that we are able to even break world records thanks to our sophisticated insurance model.”

“At Lottoland, we are in the business of making dreams come true. Therefore, we are always thrilled that we just completely changed the life of one of our players completely.  We pride ourselves on paying out even the biggest wins within record time and are more than happy to help Christina and her mum to fulfil their dreams.”

GUINNESS WORLD RECORDS official adjudicator Sofia Greenacre said: “I’m pleased to confirm that Lottoland did indeed manage to set a new GUINNESS WORLD RECORDS title for the
Largest online gambling pay-out, which now stands at an incredible €90,000,000. My congratulations go out to all those who took part, you are OFFICIALLY AMAZING.”

Launched in 2013, Lottoland has created over 350 jobs, has over eight million customers, and is active across four continents. The primary aim of the company is to offer its customers a broad choice of high jackpot games – at Lottoland, it’s possible to bet on over 30 lotteries from around the world or to play jackpot games drawn hourly. To-date Lottoland players have won more than $1.6 billion on its website.

GUINNESS WORLD RECORDS is the ultimate global authority on record-breaking, approving 6,000 records annually and claiming more than 52,000 records on its worldwide database to date.

If you wish to speak to the Guinness World Records press office, please contact [email protected].

Lottoland has grown rapidly to become a world leader in online lotto. Innovation, coupled with the freedom to offer players a vast range of lotto betting and instant jackpot games, has been key to the company’s success. Lottoland paid out €90 million to one lucky winner in Germany – this win is the largest prize pay-out for any online game, and the biggest pay-out for Lottoland to date. Lottoland also offers its customers the opportunity to win the world’s largest prize on a scratch card at €10 million and the world’s largest prize on an instant win game with “Bingo Jackpot” at €30 million.

Lottoland Australia based in Sydney and Darwin has over 750,000 registered customers and has paid out over $35m since its launch in Australia in Jan 2016.

Lottoland is active in 13 markets, has over 350 employees, and more than 8 million customers worldwide. Lottoland is licensed and regulated by the Government of Gibraltar, the UK Gambling Commission, the Republic of Ireland National Excise License Office, the Agenzia delle Dogane e dei Monopoli in Italy and the Northern Territory’s Racing Commission in Australia